Khalil KASSMI, born in Casablanca (Morocco) in 1963, made all the higher education in the University Paul Sabatier (UPS) of Toulouse (France) from 1983 until 1991. In 1991, he obtained his PhD degree in Electronics from UPS in France. His different research was realized in the Laboratory of Automatic and Analysis of the Systems LAAS / CNRST (Toulouse) in MOS technology team. In 1992, he was recruited at SGS Thomson-Casablanca (Engineer), where he was responsible of the assembly chain of the powers electronic components (TO220, Thyristors). Then, in 1993, he integrated the Mohammed 1st University in Oujda, Morocco, as Professor- researcher, and he obtained his PhD degree (Doctorat d'état) in Electronics in 1996. Since 2000, he is Professor at the Mohammed 1st University of Oujda. He is responsible of the research team ‘Materials Electronics and Renewable Energies MERE’ of Electromagnetism Signal Processing and Renewable Energies Laboratory LESPRE. He makes researches and manages PhD student thesis on materials and electronic components, cells and photovoltaic systems, solar energy system. He is a coauthor in more than 100 publications and international communications in the field of the photovoltaic renewable energies (materials, cells and photovoltaic systems). Since 2002, in the framework of the opening of the University to its socioeconomic environment: • he is responsible for cooperation’s national and international projects in the field of the Solar and Photovoltaic renewable energies (Formation and Research): Paul Sabatier University of Toulouse (France), Solar Institute of Julich, FH Aachen and Engineering Office of Energy and Environmental Technology (IBEU) (Germany), Polytechnic Faculty of Mons (Belgium), University Almanar of Tunis (Tunisia), Asamblea de Cooperación por la Paz ACPP (Spain), Man and Environment Association of Berkane (Morocco). • He has Two patents of invention on photovoltaic control and regulation (heating by the photovoltaic energy, Power Regulator with RPSGE Energy Management System for Autonomous Photovoltaic Energy Installations. • He a reviewer in Solar Energy, IEEE Eccess, Journal of Energy Storage, Electronics Letters, Journal of Enginnering Science and Technologie (JESTECH), International Journal of Hydrogen Energy. 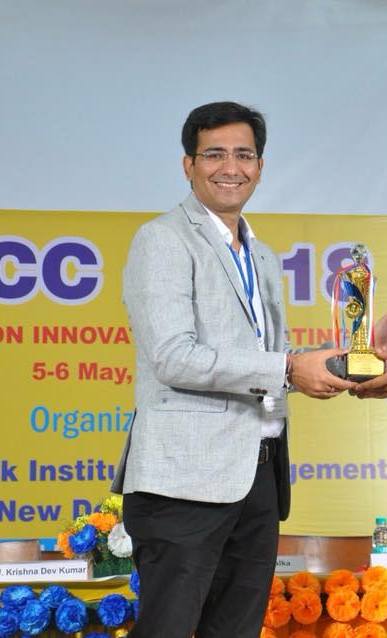 Dr. Ashish Khanna has expertise in Teaching, Entrepreneurship, and Research & Development with specialization in Computer Science Engineering Subjects. He received his Ph.D. degree from National Institute of Technology, Kurukshetra in March 2017. He has completed his M. Tech. in 2009 and B. Tech. from GGSIPU, Delhi in 2004. He has completed his PDF from Internet of Things Lab at Inatel, Brazil. He has around 70 accepted and published research papers and book chapters in reputed SCI, Scopus journals, conferences and reputed book series including 33 papers in SCI indexed Journals of Springer, Elsevier, IEEE, Wiley Journals. Additionally, He has authored, edited and editing 19 books for some of the top publishers like Springer, Wiley, Elsevier and many more. He is Series Editor in a top publishing house De Gruyter (Germany) of "Intelligent Biomedical Data Analysis" series. Furthermore he has served the research field as a Faculty Resource Person/Session Chair/Reviewer/TPC member in various conferences and journals. He has received the best paper award in a Springer international conference. He also has been invited as Keynote Speaker. His research interest includes Distributed Systems and its variants (MANET, FANET, VANET, IoT), Machine learning, Evolutionary computing and many more. He is currently working at the Department of Computer Science and Engineering, Maharaja Agrasen Institute of Technology, under GGSIPU, Delhi, India. He is convener and organizer of ICICC-2018, 2019 and 2020 Springer conference. He played key role in the origination of a reputed publishing house “Bhavya Books” having 250 solution books and around 60 text books. He is also originator of a research unit under the banner of “Universal Innovator”. He has designed question papers for multiple government organizations. He has also played the key role in promoting Smart India Hackathon at MAIT. He also serves as guest editor in various reputed International journals of Wiley, Inderscience, IGI Global, Bentham science and many more. He is also currently editing some books of Elsevier, Springer, CRC Press and Wiley which will be published soon. His Cumulative Impact Factor (CIF) is around 90